In a poll taken by The Age newspaper a week before Julia Gillard became the first female Prime Minister of Australia, her voice was voted the most impressive in Australian politics. The most impressive. Whatever that means. Following her election, however, the Prime Minister’s voice was endlessly criticised and critiqued. Had she had voice coaching? Why the change? Which was her real voice? Communication and Image Management matters. Not just what we say, but how we say it.

The voice of authority

A more humorous example of the power of voice is a recent skit by the South African comedian Trevor Noah, in which he imagines what might have happened in a meeting which took place between the late Nelson Mandela and former President of the United States Barack Obama.

The meeting took place when Obama was a junior senator, and in Noah’s reimagined scene Mandela coaches the young Obama, but not in the way you might expect. Noah describes Obama bouncing into the room, voice high and fast with excitement, and when Obama squeals: “I’m going to be just like you. And I’m going to be the first black president of America!” Mandela’s immediate response is “Not with that voice!”

Noah’s scene continues with Mandela advising Obama to slow down, to add bass to his voice, to speak every word like it’s the last word he’ll ever speak and then to add the all-important husk. 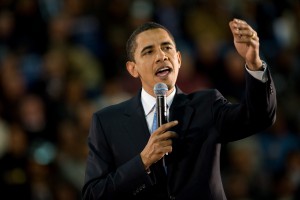 The skit ends with the two chanting (in husky, deep presidential voices) “Yes we can!”

Sure this exchange took place in Noah’s mind, but the skit works because of the truth behind it — there is something impressive and presidential in these voices. Something which commands respect and attention.

Effective communication matters because cognitive intelligence alone is not enough. When deciding if someone is worthy to lead we evaluate them not just on their merits or track record, but on their charisma and “presence”. This is part of a person’s emotional intelligence. If someone exudes an air of authority that inspires confidence, then we are likely to place our confidence in them.

An article I read recently by Jordan Gonen referred to communication as “the most under-prioritised skill”. And there is certainly a tendency to under-prioritise all “soft” skills — to assume that these are things which come naturally, whilst we focus on the more important aspects of our life and work.

Guess what? While we’re focusing on what we think is important, the most important skills (like emotional intelligence) are the ones we actually mess up. As Gonen points out:

“There are essentially two parts to building a company:

And that’s where effective communication comes in. You can no longer say “build it and they will come.” If you want people to be as excited about your product as you are then you need to communicate with them. Communication is more than just talking at people — it is a conversation. Adding some emotion makes it memorable. It means listening, it means figuring out what your clients, co-workers, and stakeholders want, and then talking to them about that.

Authentic communication is all about relating to people — being talented and intelligent is no guarantee that you won’t fall short when it comes to communication. Have you ever heard someone complain of a doctor with a terrible bedside manner? The doctor is capable and qualified, but a huge gap in their skill set creates an inability to treat the whole person. They are working transactionally and they are failing to interact on a relational level.

When we communicate, we deliver our message through verbal and non-verbal techniques. There is no use in saying you are confident with a quivering voice. We must pay attention to what message our actions are sending, and see if this lines up with our intended message or not.

Brands must communicate if they are to be effective. Personal brand, business brand, it doesn’t matter. If effective communication is not helping to build relationships then the brand will fail.

When I talk about a brand communicating I mean that it explains the heart of an individual and an organisation. Much more than a mission statement, this communication is a clarification of the balance and mixture of a brand’s fundamental facts and values.

So, to recap, here are some ways to sharpen your focus when it comes to communication:

Everything you present to the world communicates. And I hope that this article will get you thinking about the ways in which you are communicating your brand message. Don’t just leave it up to chance. Make communication a priority.

Communication is the first aspect of what we at Image Group International like to call ‘The 7 Aspects of Authentic Image Management’TM – a part of the IGI Personal Branding System.TM This is more than just a slogan – the word authentic is there for a reason. Research shows we live in the most distrustful time in history. Our team want to work with you, to create the absolute best outcomes for your business and life.

I’ll be releasing a series of videos covering these 7 aspects, and I’d like to invite you to view them. I hope that they will give you further insight into the power of authentic image management, and how to grow your power and influence. How’s that sound to you?

Jon Michail is a veteran coach with a Who’s Who clientele, the CEO and Founder of Image Group International, an Australian-based corporate and personal brand image advisory and coaching organisation that conducts transformational seminars, workshops and one-on-one personal branding coach in over four continents. He is recognised as Australasia’s No. 1 Image Coach.