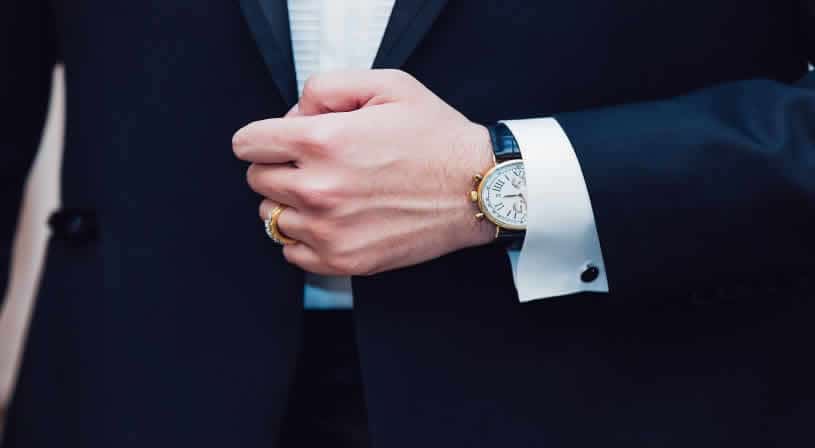 I like to think of a wardrobe as the armour you put on when you go into battle. No one goes into battle unprepared, so why would we go into our high-stakes, high-risk business world unprepared? A lack of attention to your wardrobe can signal a lack of confidence, and when you are aiming to present yourself as the capable professional you know you are, this is simply not a good strategy.

Yes, people’s opinions can change, even after a terrible first impression – and thank goodness for that because we have all misjudged people.

However, there are situations where we don’t get a second chance. A bad job interview or first date can mean there never is a second, third, or fourth impression to balance out the first. Meeting with prospective clients or business partners is another time when our first impression must be our best.

We dress to impress because our packaging is something that people can assess instantly – whilst only the surface of our personality or values can be conveyed in an initial meeting, what we wear can convey some of those values, and some of that personality, all in an easily processed package of information. Our attire can be taken in at a glance – so we want it to send the right message.

A study by Princeton psychologists Janine Willis and Alexander Todorov published in an issue of  Psychological Science looked at just how quickly we sum people up.

“Along with attractiveness, this (trustworthiness) was also the trait that participants were able to assess most quickly. The authors suggest, based on evolutionary psychology, that an accelerated and accurate ability to judge trustworthiness in others may have evolved as an important survival mechanism.”

We are programmed to make quick decisions about people and situations. It is not just laziness -although that might sometimes be a factor – a quick assessment is often necessary.

Willis and Todorov’s findings support a premise that we have been working from in our business for the past 28 years – because we know from experience just how true it is.

Malcolm Gladwell in his book Blink: The Power of Thinking Without Thinking, also examines the psychology of our split second first impressions.

“”Thin-slicing” refers to the ability of our unconscious to find patterns in situations and behaviour based on very narrow slices of experience. It is part of what makes the unconscious so dazzling. But it’s also what we find most problematic about rapid cognition. How is it possible to gather the necessary information for a sophisticated judgment in such a short time?”

“If we couldn’t thin-slice – if we could not make sense of complicated situations in a flash – basketball would be chaotic, and bird-watchers would be hopeless.”

Given this psychological imperative to make split-second judgments, we know that our stress before an important first meeting is warranted. One way to de-escalate that stress is to put thought and care into curating a wardrobe that gives us confidence as we go into battle wearing the right armour.

You’ve heard it said “Dress for the job you want, not the job you have.” Well, there is some truth to this saying, with studies finding that our perception of a stranger’s status is very much defined by what they wear.

“Perceptions did not differ on any of the other dimensions that might affect the outcome of social interactions… There were no differences in perceived attractiveness, kindness, and trustworthiness…. Just status.”

The study, published in the journal Evolution and Human Behavior, found that these perceptions did indeed translate into action.

“displays of luxury — manipulated through brand labels on clothes — elicited different kinds of preferential treatment, which even resulted in financial benefits to people who engaged in conspicuous consumption.”

A 2013 study, published in the Journal of Fashion Marketing and Management, produced similar results.

“Participants rated four images on five dimensions (confidence, success, trustworthiness, salary and flexibility). The man was depicted wearing a bespoke (made‐to‐measure) and a regular (off‐the‐peg) suit, which differed only in minor details. Participants saw the faceless images for a maximum five seconds.”

“The man was rated more positively on all attributes apart from trustworthiness when pictured in the bespoke suit.”

Ok, so your clothes can’t trick people into trusting you, which is probably a good thing. But the man was rated more positively on all other aspects. This man became more confident, successful, flexible, and worthy of a higher salary in people’s eyes simply by changing his clothes.

Wardrobe Strategies – Now it’s time to suit up and remember:

The principle of dressing for the role works for all professions, not only ones requiring formal attire. If you are a builder wearing a pair of flip flops instead of sensible work boots you are not going to be perceived as capable. It’s not just about looking good. It’s about communicating to others that you are capable and confident in your work and life.

Wardrobe Strategies is the seventh and final aspect of what we at Image Group International like to call ‘The 7 Aspects of Authentic Image Management’TM – a part of the IGI Personal Branding System.TM This is more than just a slogan – the word authentic is there for a reason. Research shows we live in the most distrustful time in history. Our team want to work with you, to create the absolute best outcomes for your business and life.

I’ll be releasing a series of videos covering these 7 aspects, and I’d like to invite you to view them. I hope that they will give you further insight into the power of authentic image management, and how to grow your power and influence. How’s that sound to you?

Jon Michail is a veteran coach with a Who’s Who clientele, the CEO and Founder of Image Group International, an Australian-based corporate and personal branding coach that conducts transformational seminars, workshops and one-on-one coaching in over four continents. He is recognised as Australasia’s No. 1 Image Coach.