The folly of Gen Why

The following article first appeared in the Herald Sun. I agree with Mr. McGuire’s insights.

THE power of the so-called Generation Y has never been so well documented as it was this week.

In the US Mark Zuckerberg and his colleagues are set to raise $5 billion in a float of social network site Facebook that will value the company at as much as $100 billion.

Only eight years ago yesterday Zuckerberg launched Facebook from his dormitory room at Harvard University.

At 27 he has blown up the model for getting rich quickly, left the biggest names in the world of business in his wake, provided a platform for political change and revolution, linked more people and created and destroyed more relationships than any other person to have existed on the planet.

About 800 million people, or 10 per cent of the world’s population, are regular visitors to Facebook.

Zuckerberg sure is a big-league player.

Having grown up knowing only good times, not even the sky is the limit for this Generation Y.

Even the Baby Boomers had the echoes of world wars and depressions in their ears, but for the best and brightest of Generation Y it is “Why not?”, not “What if?”.

It’s a seductive mix and as always the attraction of youth is finding victims as well as victors.

Unfortunately for all of us, the major victim in recent times has been the Federal Government of Australia.

For a generation brought up on Twitter, Facebook, even old-fashioned internet blogs, the old world filters are often missing.

In some jobs a bit of grey hair still has currency.

The first thing that strikes people dealing with governments is just how young everyone is around the key players.

While Prime Minister Julia Gillard is still a youthful 50, government advisers and media strategists are often half her age.

The problem, of course, is that the pay is generally ordinary, the candidate has a touch of the political zealot, the heady mix of being part of the power of politics, the hand-to-hand battle with the media and the Opposition and imagery of living the script of shows such as The West Wing can lead to disaster.

Anthony Albanese’s now famous The American President  speech should not come as a great surprise. 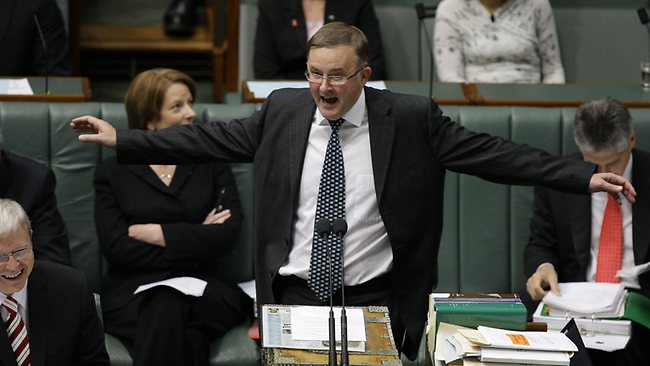 This is a generation that celebrates ripping off music, entertainment, even identities. What used to be plagiarism is now research.

Ask any teacher what happens when a project is given to a young person these days? A cut and paste of the first three Google searches for the diligent or a rehash of Wikipedia for the others. Naturally the best and brightest still excel, but you get the drift.

That’s just the way it is.

Younger peoples’ sense of history is at times nonexistent. Is it any wonder some young, idealistic, political junkie thought the script-writing of Aaron Sorkin could be palmed off as their own. “I’ve never heard of The American President.” “Michael Douglas, who?” “1995? That’s last century.”

People react these days. They don’t have time to consider, plan or just let things go through to the keeper. Twitter means people are communicating constantly. About the important and the inane.

TOPICS that were taboo are now blasted into the stratosphere.

Photos that would be best deleted are now put up by the subjects for the world to see, and Facebook to own, forever.

The incidence of deed poll name changes in Great Britain has increased by 1000 per cent because of humiliation of online gaffes and the need to start again with a clean slate.

For all the political beat-up of last week and posturing over the Aboriginal Australia Day riot, it all seems pretty cut and dried to me.

The Prime Minister’s 20-something media adviser, Tony Hodges, thought he was Eli Gold off The Good Wife  and thought he could orchestrate a little embarrassment for Tony Abbott. When things got out of hand, the Prime Minister’s security panicked and looked like the out-takes of The Bodyguard  movie.

When the proverbial hit the fan, Hodges was left on his own, judged by the standards of the old days, his career becoming as disposable as the ways of the new.

Gillard and Abbott in the first instance showed the “real” people in Canberra are made of serious stuff.

The carry-on afterwards was more of the same old melodrama.

As much as the media loves to belt politicians for paying big money for public servants, the bottom line remains: “You get what you pay for.” Not only does the personnel need to change, so, too, the culture.

The public is sick of the “political game”, the “dark arts”.

Maybe next time one of Mr Albanese’s speech writers decides to knock off the script of The American President, perhaps the emphasis should be on the line: “We have serious problems to solve, and we need serious people to solve them.”

Do you also agree with Mr. McGuire’s comments? If not, what is your view?