IN THE NEWS: How coaches can use personal branding to create value and a lasting legacy This is the case study of a great coach. A man who reached fearlessly for his full potential, and even in tragic circumstances, is motivated to help others and leave a lasting contribution. This is also a story about coaching coaches. A necessary one, as I have found that the sharing of ideas and knowledge in this area is often lacking, or too closely guarded to be of use to others. So, what is really so different when it comes to coaching coaches? To start with, coaches are people who give. They give to those they coach, and they give to the teams and communities they belong to. Coaches give their time, their expertise, their hard work and their passion. Great athletes and teams of athletes, in turn, mirror their coaches’ giving attitude by giving their all to their sport.

With all this focus on giving, you could be mistaken for thinking of coaching as behind-the-scenes work that does not need to be promoted. I would argue differently. I know that the best way for a coach to benefit those they look after is through investing the same time and effort in developing their personal brand that they do their other skills and knowledge. Personal branding is a skill that can be learnt and used to benefit the self and others. So what is it, really? You may think of branding as promotion, pure and simple. It is not. Though promotion is a part of a branding strategy, personal branding is so much more. Your personal brand, in essence, is your why? Why do you do what you do? Why do you get out of bed in the morning? Your personal brand is not a mask, it is not the highlights reel of your life, personality, or qualifications. Your personal brand is you – the real, authentic, living and breathing, what-you-see-is-what-you-get, you. Put this way, you probably can see where I’m going with personal branding proving valuable for coaches. Coaches are people who educate, lead and inspire. In order to do this, they must be people worth listening to and worth following. The best way they have to represent this, I have found, is through a lived personal brand.

“The seminar altered the way our coaches view the importance of their own personal brand image.”

One man who leveraged his personal brand to the full, for the benefit of others, and who I am proud to know, is AFL great Neale Daniher. With a promising career marred by injury, Daniher was never one to let adversity get the better of him. In the course of his career, Daniher suffered several knee injuries and underwent three knee reconstructions. Still, he was recognised as a star player, and it was Daniher’s understanding of the game that would propel him into a career in coaching. When Daniher finally did hang up his boots, he became an assistant coach for the Fremantle Football Club, and from Fremantle, he made the exciting transition to the senior coach of the Melbourne Football Club, remaining there for ten seasons from 1998 to 2007.

“We’re told there’s no hope, and we cannot accept that.” 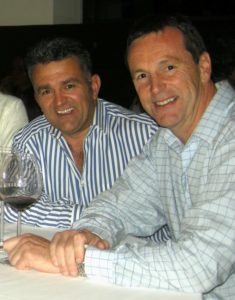 It was during Daniher’s time at Melbourne that I became his coach and mentor, and so it was with great pride that I was on board to see him step into the role of general manager of the West Coast Eagles – certainly no mean feat, as careers after coaching (like careers after sport) are difficult to navigate. It is even rarer for former coaches to step into management positions. Sadly, Daniher’s physical health was to once again keep him from football. In 2013, Daniher stood down from his role, and in 2014, he announced the reason for his departure. Daniher had been diagnosed with Motor Neuron Disease (MND). Ever since that day, Daniher has shown the same dedication and resolve in his fight against MND that he did in his football career, and in 2016 Daniher received a Member of the Order of Australia award for his service to the community and to his sport.

Every day at least two people are diagnosed with MND in Australia, and every day at least two Australians die as a result of the disease. The patterns of weakness and rate of progression vary from person to person, and while some people can live a long time with MND, the average life expectancy is 27 months from diagnosis. If Daniher finds these odds daunting, he doesn’t let it show.

Even with such a great honour as the OAM bestowed upon him for his work, Daniher remained resolutely outwardly focused. He paid tribute to the efforts of the then small, volunteer-run, Cure for MND Foundation, and praised the work of the “freeze army” who support the foundation’s work “to cure, to care, and to make aware.” Daniher expressed his hope that by accepting this honour he would remind others diagnosed with MND “that they’re not alone” and called the AM “a recognition for the great support I’ve had from my family”.

“The seminar altered the way our coaches view the importance of their own personal brand image and the effect it has on their ongoing personal and professional development,” he said. “I also believe this will enhance their lives on a personal level long after they depart the coaching world, and I have had feedback to that effect from our coaches.”

Now, as Daniher uses his high profile to fight for MND research, funding, and education, he does so through his strong personal brand. During his stellar AFL career, as a player, coach and manager, Daniher earned himself a platform and a voice. His personal brand is not shallow or self-promotional. It is authentic because it is born of his values and achievements. Daniher is a man who walks the talk. After a career characterised by giving (to his teammates, to the players he coached, to his sport, and of course to his family) Daniher triggered a response of giving in others. He does not use this for his own gain. Instead, Daniher encourages those who know him, who admire him and are inspired by him, to give to others.

Faced with a terrible diagnosis, Daniher chose not to let it defeat him. He has chosen not to be victimised, but to approach this new challenge in the same way he has faced many challenges before, courageously using his skills, expertise, and voice in a quest to build something better.

For the good of the team

When Daniher was coach at Melbourne, the club faced some challenging times. In the 2004 pre-season, with the Demons struggling for membership, Daniher talked to the media. His well-remembered “sermons” soon earnt Daniher the nickname “The Reverend” and it was this new branding, coupled with some early season successes, that helped boost the club’s membership and public profile. No doubt his inspired oratory also boosted player morale, but whether in the locker-rooms or in front of the camera, Daniher created and used his profile to benefit his team.

“AFL football is a billion-dollar business with thousands of employees and I have strong evidence that the professionalism model works.”

Personal branding is all about communication. Sometimes that communication is verbal (as it was with Daniher’s media appearances) but there has to be something more to a coach’s communication. Daniher had something to talk about (the brand of his team, their successes, their training) he crafted a platform and a voice (his own distinctive brand, his style of coaching and speaking) and that is what made his communication truly effective. As a natural leader, Daniher began the creation of his personal brand almost effortlessly, but as he told me all those years ago, it took time and training before he realised just how important and powerful the projection of a professional image can be.

“I now have the view that our prospects of success would be assured if we project the professionalism (at all times, on and off the field) that is right for our business,” Daniher said. “AFL football is a billion-dollar business with thousands of employees and I have strong evidence that the professionalism model works.”

Personal branding is often seen as imperative for athletes who seek to attract or retain sponsorship, but less so for coaches in their behind-the-scenes roles. I would like to put it to you that personal branding is a business and life skill like any other. One that will serve you well, just as it did Daniher, and if you follow his model, one that you can in time use to serve others.

This article was originally published in Issue 15 of Coaching Life Magazine.

Jon Michail and his team at Image Group International partner with ambitious individuals to achieve breakthrough results with contrarian and disruptive ways to grow and monetise their personal and business brands. A veteran, multi-award winning coach and author with a Who’s Who clientele of executives, entrepreneurs and elite sportspeople, Jon is the CEO and Founder of Image Group International, an Australian-based corporate and personal brand image advisory organisation that conducts transformational seminars, and one-on-one coaching in over four continents. He is recognised as Australasia’s No. 1 Image Coach.