How entrepreneurs can learn from the Wheeltons

Angela and Paul Wheelton are the kind of people you don’t meet every day. Both highly successful in business in their own rights, the two have now joined forces in philanthropy, and it is this that has seen them both recognised under the Order of Australia.

Angela came from a background as a business leader in science and healthcare. As CEO (ANZ) for Straumann (the world’s leading manufacturer of dental implant systems), she was the first and only female executive in the company, leading her division to become the top performer.

Earlier this year, Angela was awarded the Medal of the Order of Australia as part of the 2018 Queen’s Birthday Honours for her significant contributions to the community.

“I tend to look at philanthropists as being the next stage in the entrepreneurial life cycle and it is leadership that has led to their success in the business world. Bringing that leadership skill to philanthropic activities enables the success, that is being achieved, to be possible.” – Paul Wheelton. Tweet

Whilst both Angela and Paul are distinguished leaders in business, Paul Wheelton has never been to a job interview in his life. After graduating from Camberwell Grammar School, and whilst working at a Box Hill service station, he met Bob Ansett who had just started up Budget car and truck rentals. Bob hired Paul to work with him at Budget Rent a Car on the condition that he went to university part time and studied business and accounting. Paul passed his degree and progressed on in Budget to become Chief Accountant.

At this point Bob funded him to buy his first Budget car and truck rental franchise, and Paul was to gain his fortune from his ownership in 12 Budget Car Rental franchises.

Now, Paul and Angela are running Wheelton Philanthropy, looking at key trends around the globe and seeking to spread the message of positive and engaged philanthropy for families and the broader community.

So what prompted the Wheeltons’ shift from business to philanthropy? Here is how Paul sees it.

“I tend to look at philanthropists as being the next stage in the entrepreneurial life cycle and it is leadership that has led to their success in the business world. Bringing that leadership skill to philanthropic activities enables the success, that is being achieved, to be possible.”

“Philanthropy is often stated as being the big picture cousin of charity. It is less of the emotional, immediate action and relief focus and more focused on the long term, strategic and problem solving initiatives. By definition then, leadership is an important and essential part of success in philanthropy.”

When you get, give

Paul says that his lightbulb moment came when after years of business success, he paused to ask himself a very personal question.

“It was the fundamental question of ‘When is enough, enough?’” he says.

“I looked around and saw people who’d been on the same entrepreneurial journey as me who just kept building more businesses and I thought, ‘I’ve got enough. Do I spend the rest of my life doing the same thing or should I go down a different path and try to make a difference with what I’ve been fortunate enough to receive?’”

“I began to talk with my business mentor Jon Michail, about ways that I could work on the business, rather than spending all my time working in the business, at the coalface, seven days a week.”

This shift in focus is what allowed Paul to spend the majority of his time in philanthropic work.

“As a leader, I strive to instil the passion of education and learning to give others the confidence and courage to embrace their dreams and turn them into reality.” – Angela Wheelton. Tweet

“Our plan for the future is that one hundred per cent of what we make in our businesses is going to be donated. We don’t need more money personally for ourselves – we know when enough is enough.”

Though philanthropy came as a natural extension of his entrepreneurial career, Paul says he was brought up with a giving mindset.

“Being a practising Anglican, I was also exposed at an early age to the spirit of giving and would listen with intrigue to where a portion of the weekly collection would be going and who it would help. This also introduced me to the concept of tithing,” he says.

Giving generously out of what he had received was always a part of Paul’s life, so that it was only natural that when his earnings increased, so too would his philanthropic endeavours.

When you learn, teach

After many years as a senior business leader, Angela believes that education and learning form the lifelong process of acquiring vital skills and tools to build a sustainable, successful and prosperous life.

“As a leader, I strive to instil the passion of education and learning to give others the confidence and courage to embrace their dreams and turn them into reality,” she says.

“Ultimately, the cornerstones of life experience, work experience and education empower us with the capability to actively contribute to the growth and development of ourselves and others. All aspects of my past and current career choices, professional associations and more recently, involvement in charitable organisations, have been driven by this philosophy.”

Paul is also passionate about lifelong learning and education, and so the Wheeltons place particular emphasis on supporting organisations such as Life Education Australia, and the Bali Children Foundation – an organisation that values education, and the positive impact that this can have, not only on the children who participate, but on their wider community and future generations.

“I learned early on in our journey that the difference between underdeveloped nations and those moving to developing and developed status was the opportunity given to women,” Paul says.

As a father to three daughters, he was well aware that even in Australia his son got a fairer go than his girls. But it was in Bali that he really saw the vast gap in opportunity between the children of poorer families.

Working to build community centres, orphanages and bring educational opportunities to children in remote Balinese villages, Paul was struck by the gender divide. Families sent their boys to the programs Paul and Angela had established, while their sisters stayed to work with the rest of the family.

“The great thing is I have not met one person who does not want their child to get an education, it’s just that they can’t afford it. The girls are working the fields at the age of ten and that’s the end of the story.”

“When we’ve got that research, I’m confident we’ll be able to convince the government that supporting women and girls is not just about gender equity, but that there are also economic benefits.” – Paul Wheelton. Tweet

“Our experience has taught us that the girls are yearning to learn, and more so than the boys. The girls put in an incredible effort.”

But it doesn’t end there, as these girls move on to greater things thanks to the education they have received, they pass on knowledge and economic benefit to their communities as well.

“The statistics from the UN are that when women work they reinvest 90% in their families compared to 30 or 40% for a man,” says Julie Reilly, CEO of the Women Donors Network. 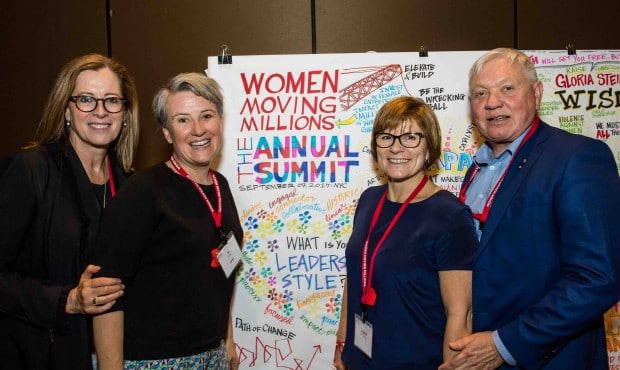 Wheelton Philanthropy is currently involved in a study following ten Balinese girls who are supported to go to university for the next decade in order to evaluate outcomes and impacts upon the girls’ local villages, families, and themselves.

“When we’ve got that research, I’m confident we’ll be able to convince the government that supporting women and girls is not just about gender equity, but that there are also economic benefits,” Paul says. “I think that lesson will be applicable here too, not just in Indonesia.”

“The biggest thing I’ve learned is that there are a lot of passionate people out there starting not-for-profits but more than passion is needed to make change,” Paul says. “There are too many not-for-profits, so many of them have the concept right, but end up duplicating the work of others.

“Sometimes I’ve funded things where, if I’d done a bit more due diligence, I would’ve picked up on the fact that there was already another organisation doing it better and I would’ve encouraged them to join up with them instead of creating another administration to do the same thing.”

The Wheeltons have found that it is important, not only to give generously, but also to give wisely. There will always be worthy causes to which they can give funds, but in order to make their philanthropic work achieve the greatest impact they now consider carefully how they can best partner with people and organisations who have the runs on the board, in addition to having their hearts in the right place.

After all, philanthropy is not about throwing money at something to feel better about yourself, or rushing in headlong with a saviour complex. Just as entrepreneurs carefully evaluate what the market wants, and who their product will be serving, and what they must achieve for and with partners and stakeholders, so any philanthropic venture must take the same considered approach.

As Aboriginal elder, activist and educator, Lila Watson once said, “If you have come here to help me you are wasting your time, but if you have come because your liberation is bound up with mine, then let us work together.”

So, what do I think entrepreneurs can learn from the Wheeltons? I believe we would all do well to learn from their leadership style. To see that unconventional roads can become the path to success, to value lifelong learning and wise leadership, to be good stewards of our finances and to use the skills and resources that we acquire to improve the lives of others.

What do you think about your role and responsibility as a leader or an entrepreneur? I would love to hear from you!

Cool in a crisis: How all entrepreneurs can learn from ex-Fire-Chief Alan Quinton

How entrepreneurs can learn from creatives