A SURVEY has revealed that 98 per cent of club assistant coaches in the AFL are suffering ”high psychological distress”. 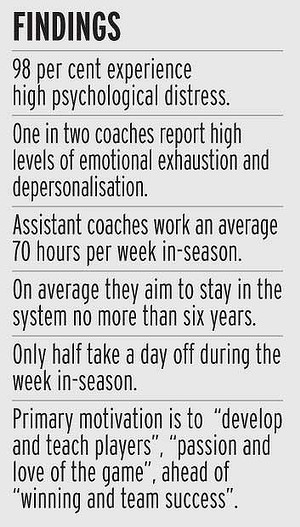 The survey, conducted by researchers from La Trobe University, confirms AFL fears that the second line of coaches are being driven to the point of exhaustion. The league has funded a new full-time career and professional development manager for the AFL Coaches Association, to be filled by former Athletics Australia national coaching manager Michael Poulton, as part of the push to help the assistants.

”What we all know is that coaching is a high-stress job,” said the AFL’s football operations manager, Adrian Anderson, yesterday. ”They’re under enormous scrutiny and pressure and this research highlights that.”

Anderson admitted the numbers were ”a concern”, adding: ”It validates what we all perceive about coaching.”

The AFL’s ranks of assistant and developmental coaches has ballooned to 150, but the survey proves they are carrying an enormous workload. Their average work week is 70 hours and many of them work seven days, and often in stretches of 14 consecutive days or more.

They expect to survive just six years in the industry.

Dr Mandy Ruddock-Hudson of La Trobe said she was not surprised by the 98 per cent figure, given the stresses of the job. She said that in comparison with other careers, coaches suffered from the public nature of the job, the scrutiny from media, supporters and sponsors. ”People in other work environments potentially don’t get that, so I think those figures are very unique to this particular population.”

”The big finding we’ve got out of this is … to educate clubs that ‘you’ve got some really good people here. We don’t want a burnout factor. They’re great coaches’.”

Carlton senior assistant coach Alan Richardson said the findings were important in the sense that club managers would become aware of the issue.

”We love it, but at times we really need some circuit-breakers. I think that’s what the report is saying.”

The research staff interviewed 80 AFL assistant coaches as part of the project. Frawley said the next step would be to survey the attitudes of head coaches.
Read more: http://www.theage.com.au/afl/afl-news/coaches-suffer-severe-stress-20120815-24927.html#ixzz243Hn4fEi